District 9: A lifeboat of refugees from another planet 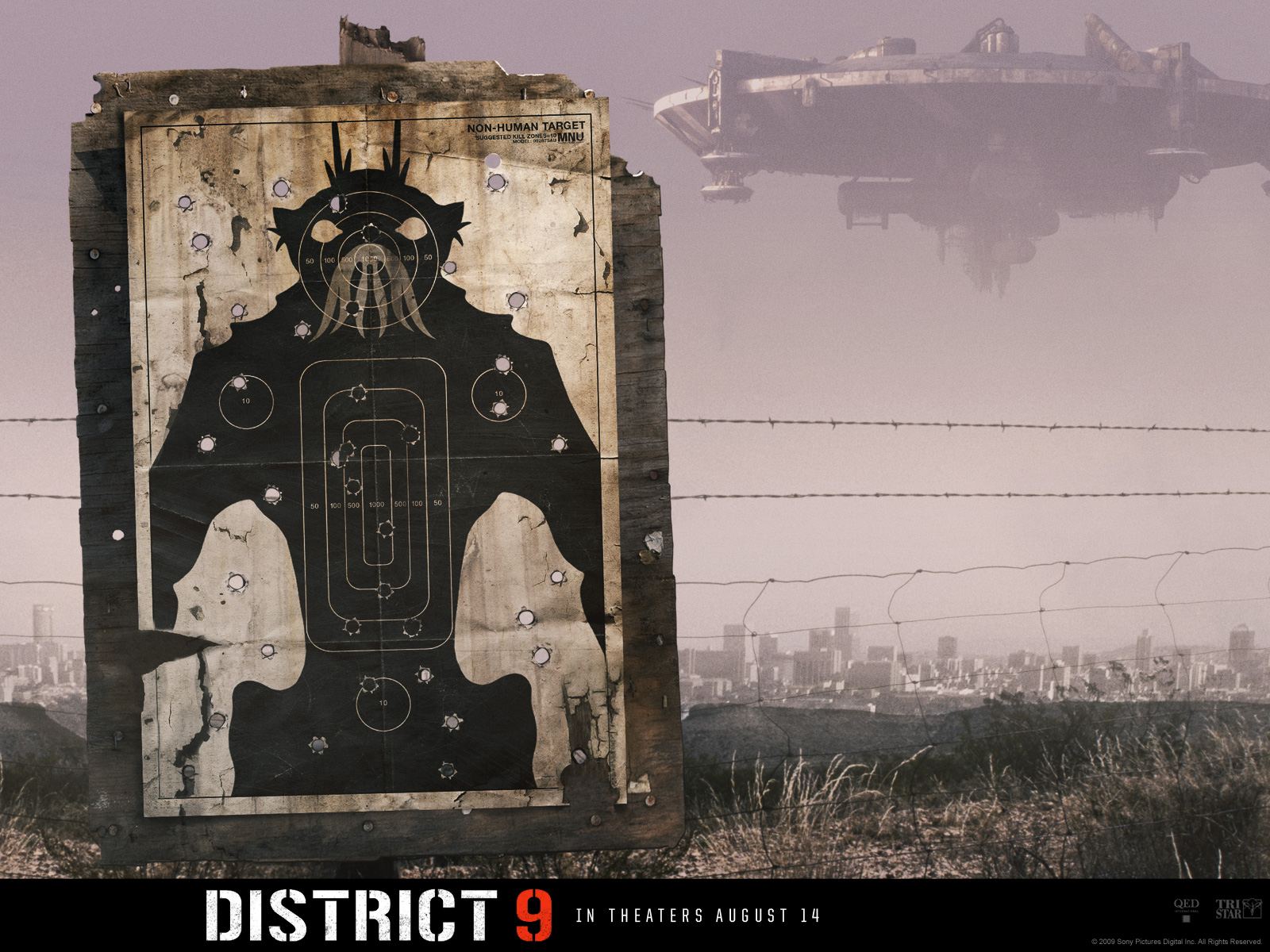 Johannesburg, South Africa. One morning in 1982,  the residents wake up to an amazing sight :
A huge spaceship hovers over the city.

Nobody knows where it came from or why it is there, whether its occupants are friendly or hostile.
For several days the authorities are unable to communicate with the unknown visitors.
Finally, when the  silence becomes unbearable, they decide to break into the spacecraft.

What they face is a sick, hungry, despairing and wretched population of hideous alien creatures that resemble to insects or ... prawns. 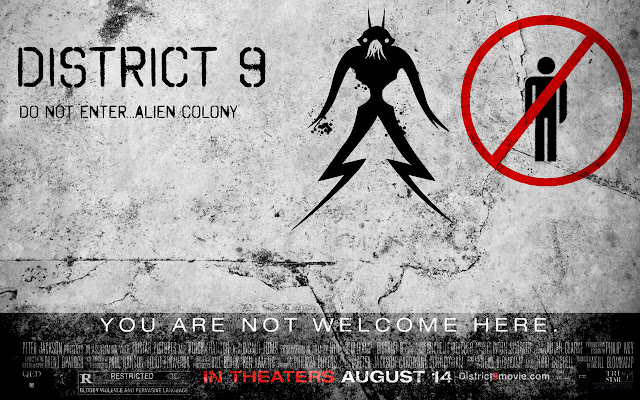 28 years later, the initial hopes and celebrations for the historic first contact with an alien civilization have subsided.
The Government of South Africa had initially decided to host its "guests" at a refugee camp on the outskirts of the city of Johannesburg, in the shadow of the spacecraft which all these years, remains abandoned and unmoved.

The alien population has increased and the townspeople are treating the alien immigrants with hostility.

The camp has turned into a ghetto.
It is called District 9,   it is controlled by Nigerian gangs of smugglers and guarded by MNU (Multinational United), a private military force . 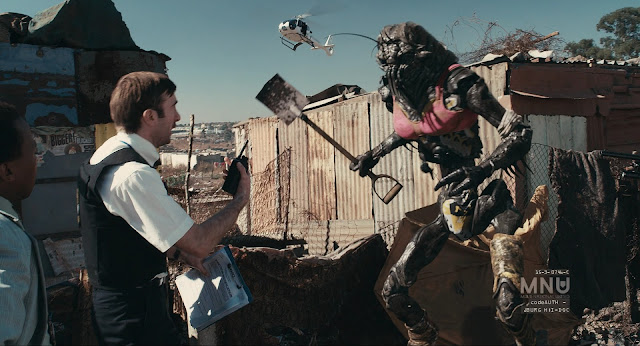 MNU's real objective is to have access to the alien war technology. The problem is that the alien weapons only work when operated by the aliens' DNA.

After continuous pressures from the residents of Johannesburg, the government decides to evacuate district 9 and move the alien population to a new camp in the desert, away from all residential areas.


MNU which is responsible for the relocation, instructs its employee, Wikus van de Merwe, a methodical bureaucrat-totally unsuspicious of what he will have to face, to notify the eviction decision to the alien population and get their written consent.


During the operation, Wikus is exposed to a strange extra-terrestrial chemical and he gradually transforms into an  alien.

Very soon, Wikus revises his views and with the help of two unlikely allies, he starts a fight for survival that brings him face to face with his former employers, the truth about the alien presence and   his  own self .

Director and co-writer of this unique film/experience, is the 30 year old -in 2009, South African Neill Blomkamp.
Blomkamp, ​​who studied visual effects and had a career in advertising, was  initially recruited by Peter Jackson, to direct a film based on the video game "Halo".
When the project foundered, Jackson, who appreciated the young talent, offered him 30 million dollars to direct a project of his own, with Jackson producing. 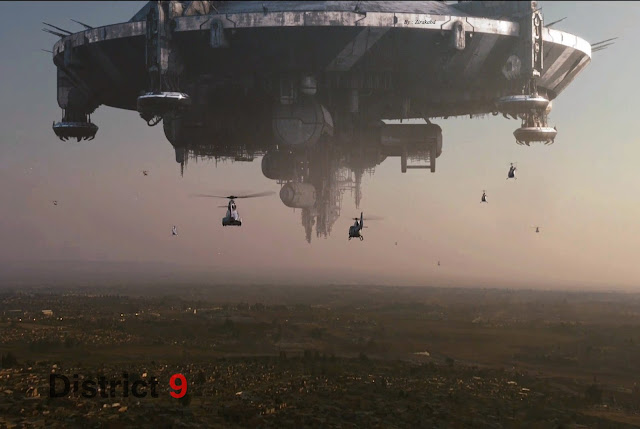 Blomkamp seized the opportunity, already having a finished screenplay for a feature film in his mind, since in 2006 he had directed a short film that dealt with the same issues as District 9.


The 6-minute film  titled ¨Alive in Joberg¨, was inspired by real events that happened during the Apartheid era  in 1966, in Cape Town and specifically in Region 6 -District 6, when a government decree designated it as an area ¨ FOR WHITES ONLY ¨


As a result 60,000 colored inhabitants were forcibly compelled to leave their homes and businesses  and to  be  displaced in  blocks of flats,  25 km away from their old neighborhood.


You can watch the original short film here:

District 9 was one of the very first movies made with the then revolutionary digital camera Red One, which was offered   by its generous producer and has the form of a Mock-documentary.


It begins with interviews of  people who have witnessed the arrival of the spaceship and presents the facts in the form of news stories.

The protagonist Wikus van de Merwe is introduced in the same way:(The hero's name is commonly used in South Africa as a character in jokes and was used for that very reason) 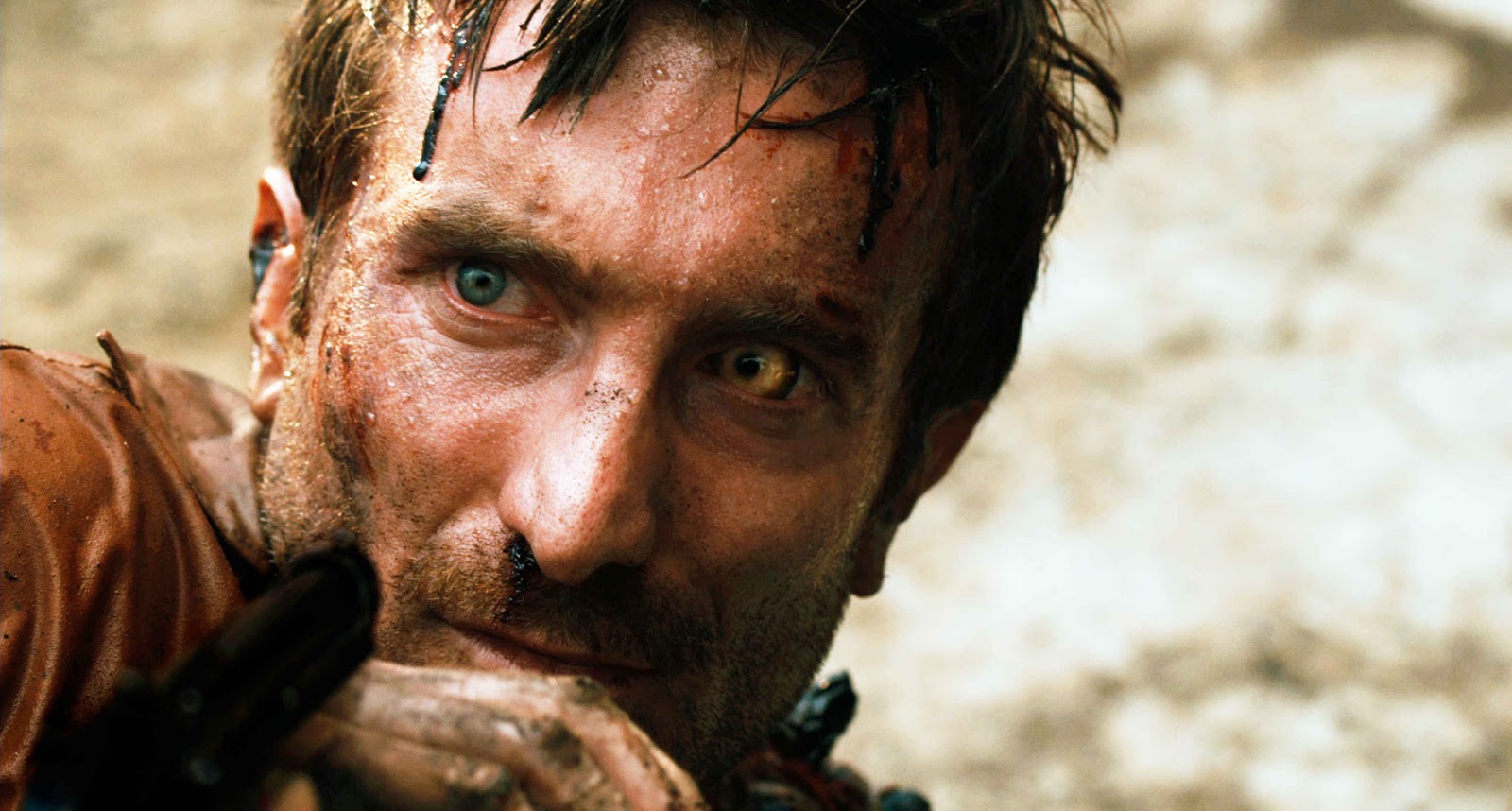 The role of  Wikus is played by Sharlto Copley. An old friend of the director, Copley who was a television producer,  had a childhood dream, to become an actor.
Not only did he to starred in his buddy's film, Copley managed to steal the show.

The feeling that we are watching uncut  shots from the live broadcasting of a blatant reality, with interviews of ordinary citizens, officials and images of gigantic aliens, the view of which tightens our stomachs, cannot be described in words.
All this combined with the unsuspecting -euphemistically stupid-  lead character, creates an initially strange and indigestible still elaborate outcome that offers much more than you expect to get out of it. 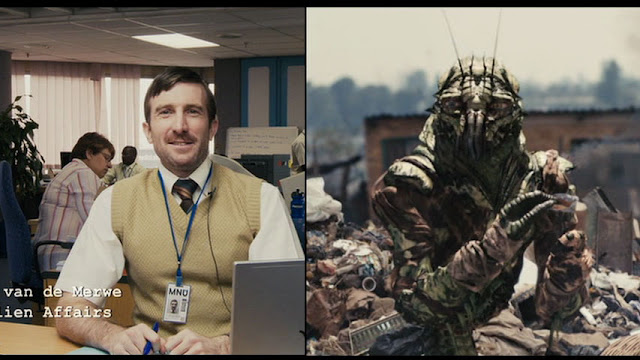 Reality has never seemed more   surreal, even when you know that  you are watching a  science fiction movie.

The clearly visible political comment of the director, is not just for the modern history of his country, focusing on the Apartheid era. It refers to issues such as xenophobia, racism, segregation, illegal immigration.

When the alien spaceship first appears over Johannesburg, we all wait to see it carrying a higher form of life with advanced technologies, many steps ahead of us in the long ladder of evolution.
Still  the spacecraft proves to be big lifeboat full of abandoned misery that looks to be saved by us.

Moreover, the form of the life it contains   looks ... abominable. 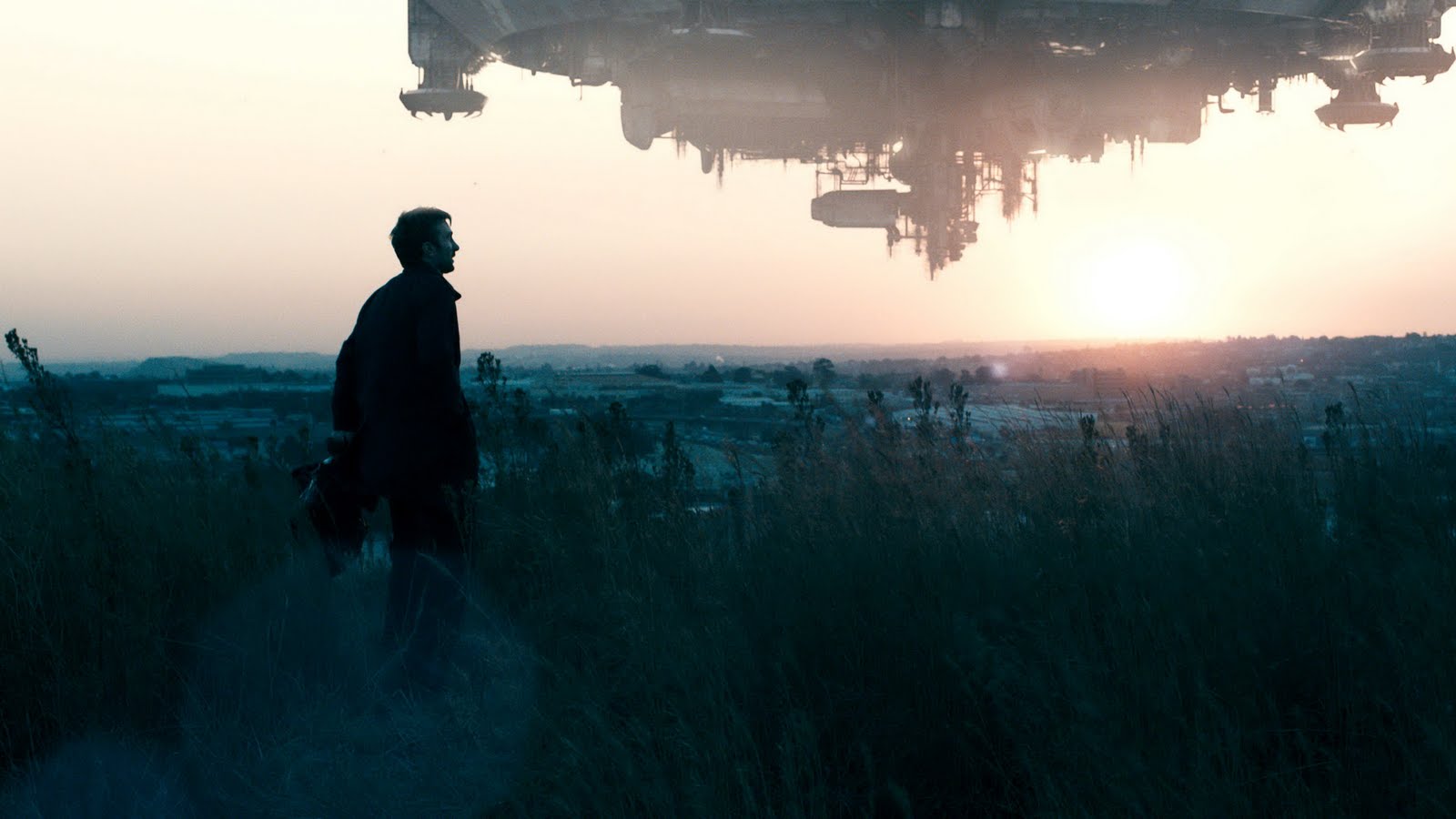 The director intended to design the aliens in a way that the audience could find no  connection to any known form of life to identify, a great thought in theory only, since it would make the plot of the movie impossible.
The final design resulted in the 3 meter-bipedal locusts/prawns and the film's artistic compromise finally paid off ,  since there comes a time when two  and eventually three of them steal our hearts .

The irony running through the film, at the limits of parody and the grotesque is one of its greatest virtues . 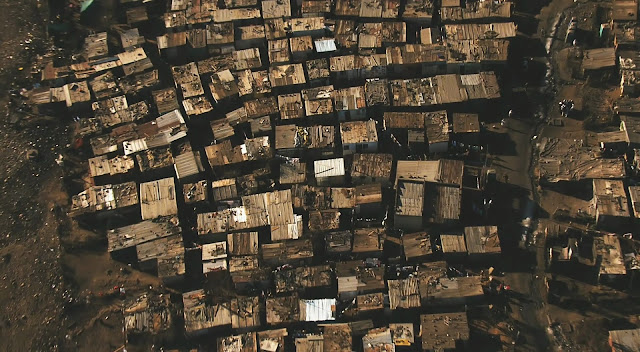 The real ghetto that once housed and separated the black populations of Johannesburg, in the film is turned into an alien camp.
The blacks take the place of their former white oppressors, exploiting their new victims in any way they can.

Still the film's final reversal is the one created by the most interesting plot device of all: Transformation

As Wikus  slowly   separates  from his earthly self, he leaves behind the worst traits  of his  human nature.

When  he is finally occupied by the  alien DNA,  he is more "human"  than he has ever been.

Discover District 9 on Blu-ray and DVD. 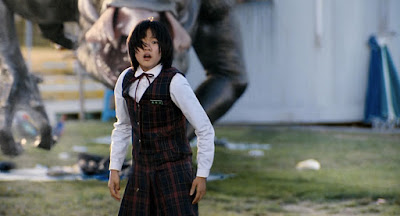 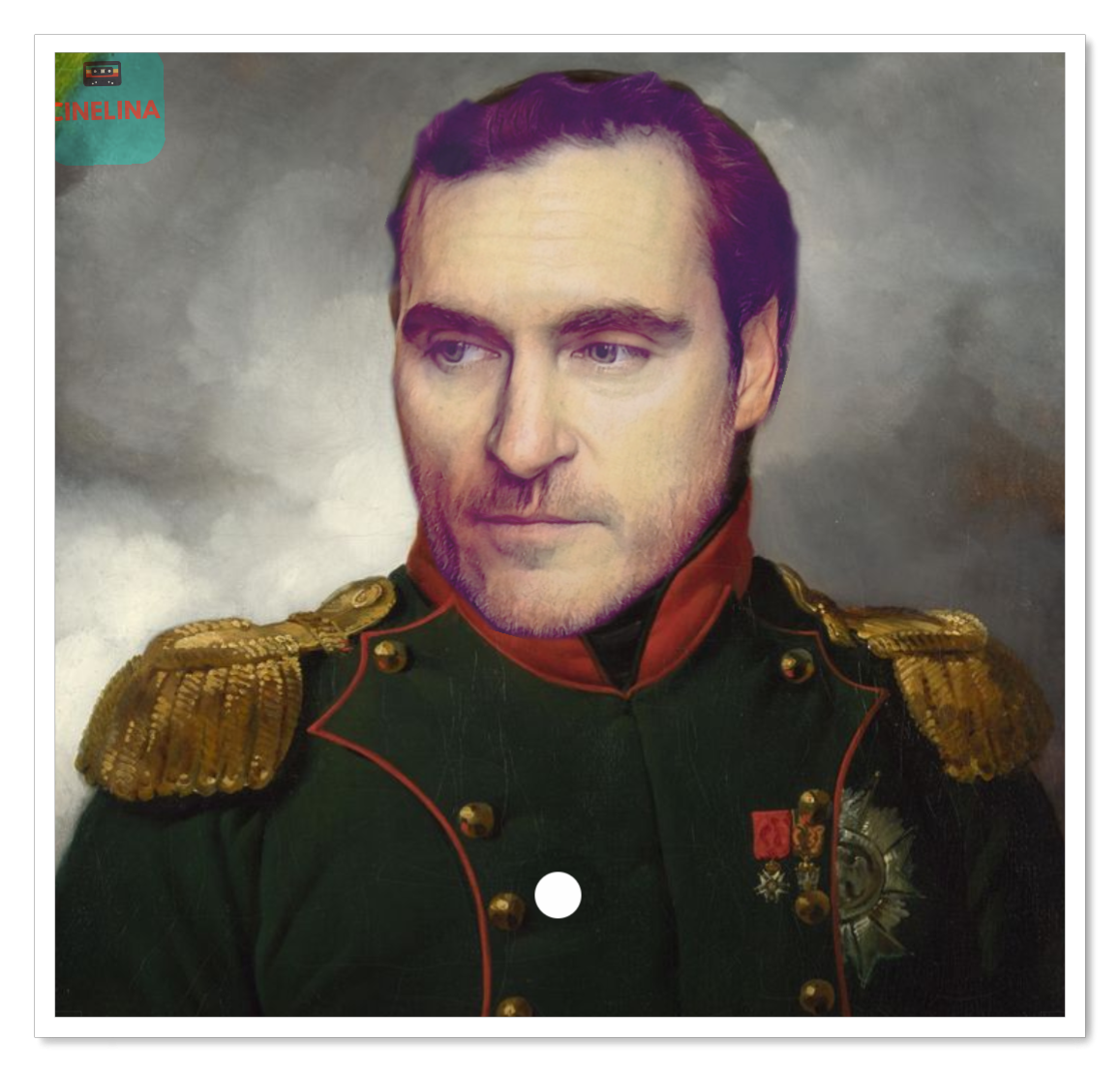